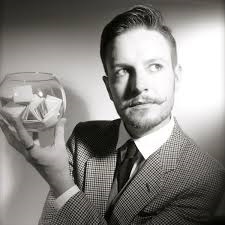 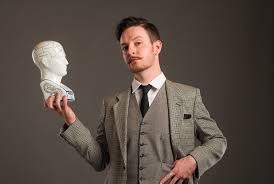 Do you watch TV magicians and wonder how on earth they astound their audiences? Do you wonder whether they use stooges or simply use camera tricks?

When I was at the Impossible Show launch last year, I got very close to the ‘magic’ but as close as I was I still couldn’t see how the tricks were done, so when I was invited to meet Alex McAleer, a man described as having ‘Uncanny powers of prediction’ I knew I had to take reinforcements, and who better than the most sceptical people I know, my 13 year old twins.

These are boys who constantly try and guess how things are done – ‘it is up his sleeve’, ‘that guy is his assistant’, ‘they use reflections’ (apparently they learned that in Science) are regular phrases when we are watching TV.

I was counting on 3 pairs of eyes would be better than just mine.

We met Alex at the Assembly Hall Theatre in Tunbridge Wells where he’ll be performing in ‘Champions of Magic’ on Saturday March 26th 2016. We were able to ask him a few questions before he attempted to read the boy’s teenage minds.

Tell us about Champions of Magic.

There are four acts in the show. Edward Hilsum who amongst other things produces lots of doves from thin air, (the boys immediately gave him a look) *grins – far too many to pull out of a coat.

Fay Presto does the close up magic aided by big screens which show the audience the more intricate details close up.

There is myself, the mentalist, the mind-reader.

Completing the company are the double act ‘Young and Strange’ who do the big illusions!

One of them gets inside a cardboard box which you can see all around and the other one sticks in lots of sharp sticks, eventually it is so full of them that the audience assumes that he is not in there anymore until they see a hand sticking out and waving – it is a great trick.

They also have a spectacular finale where they have a huge industrial fan onstage and one of them walks through the blades.

Obviously these ‘tricks’ are extremely well rehearsed, but are they dangerous?

I guess they could be, their risk assessment forms must be very big! Once they were rehearsing for the show and some H&S guys pitched up and told them that to comply with the insurance they had to declare how the trick was done! Young and Strange sent them a desktop fan and an action man and told them to work it out. I doubt if they ever did.

Alex then turned to my sons D & J.

Alex McAleer chose me to help him perform a mind-reading trick.

He began by taking out a pack of cards and told me that one of the cards in the box was the wrong way round, and I was going to guess or “mind read” his mind to find which card it was!

First he asked me whether the card was from a red or black suit, I guessed black, the next question was which of the black suits it was, I guessed spades. He then asked me to picture in my mind but not to say out loud which number of spades the card was. I first thought of 8 but he told me to think of a different number so I changed to 6. I was then told to say out loud the card I had chosen, the 6 of spades. After opening the box he spread out the deck and picked out the card that was upside down. Amazingly, it was the 6 of spades.

Usually when you see these kinds of performances you think that it was set up and fake but this was completely new to me and all totally legitimate. I know now that these tricks are real and not rehearsed.  Alex McAleer was outstanding and gave us a great insight to what it is like to be a magician.

I am hoping I shall be able to see the show and see more tricks in front of a live audience. I would recommend everyone to go see Champions of Magic to see if they can see how it’s done.  D.

Alex asked me to think of a word, anything at all as long as it was under seven letters. It could be an object in the room, a name, a place etc, I chose the word ‘light’. I had to write the word down and put it in an envelope so that I couldn’t change my mind.

Alex then asked me to think of the a letter in the middle of the word, I thought of the letter g before thinking that was too obvious and I then thought  of h before settling on i. ‘Ok’ says Alex, ‘you bounced about a bit there, you went from g to h to I’. I had read somewhere that mind reading is all about facial expressions so I set mine to a neutral expression. But as soon as he said that I was so shocked my face must have changed entirely!

He wrote down what he thought the word was and showed it to me. It was the right answer! I think that when I lost my neutral expression he must have known he was right. J

It was absolutely amazing! The looks of astonishment on their faces was hilarious!

We asked Alex if he could share how it was done.

I’m always very clear when I go on stage to explain that I don’t profess to be physic or supernatural, I only talk to the living and certainly can’t speak to the dead.

I use various techniques, I watch body language and facial expressions, I use suggestion techniques, psychology and lots of other tricks. Also when we are on the stage, nerves and pressure can also come into play because it is a big show. There are lots of elements involved.

How do you convince audiences that what you are doing is not set up and who you choose is completely random?

In the show I have a toy chimpanzee which I call ‘Chimp-ion’ (of Magic) and he gets thrown out into the audience and whoever catches it is invited on stage.

I always ask people to write their choices down as well so that they are not accused of agreeing with me.

How did you decide you wanted to make ‘mind-reading’ your career? It is not the most conventional of choices.

When I was 15 years old I became interested in mind-reading and memory tricks. I read books about neumonics and muscle reading etc and when I started showing off to family and friends I found I was quite good at it. Then I just progressed and learnt more and more, it is a set of skills and techniques that I have developed over the years.

A guy on twitter asked me today if I could read his mind, it can’t work like that! It is the same as if you went up to Dynamo in the street and asked him to make an elephant disappear he couldn’t there and then.

Have you ever got it wrong?

Never in Champions of Magic – but yes it has happened, thankfully, it is very rare. I have to use my charm and try to dig my way out of it.

Alex McAleer was interviewed by Sammi O’Neill and her two assistants, D & J who are both convinced that that next time they will work out how it is done. 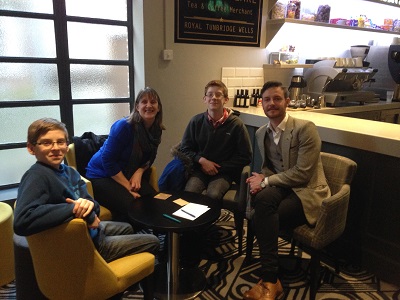 Alex McAleer performs as part of Champions of Magic