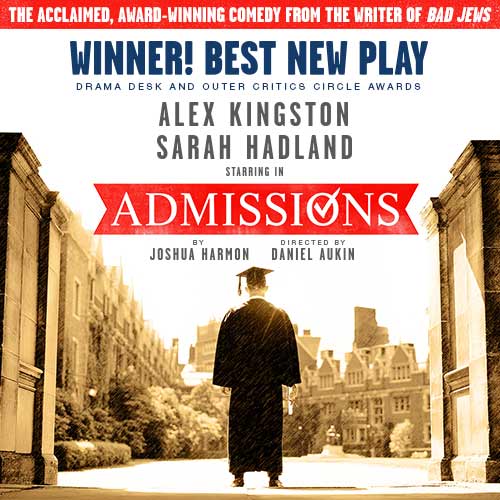 Does personal ambition supersede progressive values? Is equality worth self-sacrifice? These are just some of the enormously political questions that Joshua Harmon’s ‘Admissions’ grapples with. This new London production of Harmon’s 2018 satire, starring Alex Kingston, is engaging, thought-provoking and, most importantly, well-delivered.

Sherri Rosen-Mason (Alex Kingston) is the Head of Admissions at a top US private school fighting to diversify the student body. When her son, Charlie (Ben Edelman), is applying to an Ivy League school, her ambitions for her son come into conflict with her progressive agenda. The play is ultimately about familial relationships and how far people are willing to champion change until it interferes with their own livelihoods. As Charlie challenges his mother, how is someone meant to take a seat at the table if nobody else is willing to leave theirs?

Alex Kingston is fantastic in the lead role of Sherri. Throughout the 100-minute play, she barely leaves the stage, and the audience are taken on her journey from a champion of equality to a champion of her own son’s ambitions. She manages to effectively convey the comedy of a privileged individual with hypocritical positions, as well as the emotion of a mother who desperately cares about her son’s future. Ben Edelman is also a stand-out, having originated the role of Charlie in the 2018 Lincoln Center production. I want to refrain from spoiling the arc of his character, but the turmoil he faces is excellently and convincingly portrayed.

The real highlight of ‘Admissions’ is the script. Politically-charged and headline-grabbing soundbites litter the book, and Joshua Harmon effectively and comedically exposes the potential hypocrisy of the privileged middle-class championing equality until it interferes with their own ambitions. It is a particularly poignant tale to tell in the week that federal prosecutors in the US exposed a series of cases of wealthy individuals buying their way into top universities. The themes in Harmon’s piece are real and are relevant, and this is perhaps why the play is being so well-received by audiences.

Admissions runs at the Trafalgar Studios until 25th May before embarking on a small UK Tour.